A serenely acted one-man show “Unlaunch’d Voices” starring Shakespearean actor Stephen Collins hosted by the indefatigable producer Wendy Bidstrup proved a meticulously mounted showcase. The Marion Art Center, like a miniature Ford Theatre (Washington, D.C.) with its 19th-century portraits and one balcony box seat was a most appropriate ambiance for Collins’ noteworthy revitalization of one of our nation’s greatest war-time genre poets.

In his lively introduction as Whitman to his audience, I believe Collins singled out this reviewer as an “old elephant.” His tone set a captivating and educationally refreshing familiarization with this great creator of free verse: “Leaves of Grass” (self-published, 1855).

As a journalist, Whitman wrote for the long-defunct Brooklyn Eagle and Long Island Democrat Collins presents an intimate study, yet shies away from the symphonic and flamboyant side and nature of Whitman. His Concord letter from Ralph Waldo Emerson is an effective dramatic device which allows him to show how these visionary precursors of spiritualism and transcendentalism kept through correspondence an unified contact with each other long before the computer. He successfully refutes with Whitman’s own writings those critics who blackballed this apostle as obscene, and in the one hour plus presentation given at M.A.C. there was some deletion from the homo-erotic specifically in the battlefield poems and letters Whitman wrote while serving as a male nurse during the Civil War.

This is a most healthy, soulful celebration of the human body, wherein “sex advances the horizons of discovery.” Whitman said “censorship is always bad, always ignorant,” and that “animals were not demented with the mania of owning things.”

Americans ignored Whitman’s work, while Europeans embraced him. He lived in poverty all his life and was judged to have been unsavory by his detractors. About war, he wrote, “I’m at peace with God and death.”

Collins’ performance can be booked for schools and colleges, etc. It’s a literate and refreshing approach. He has played in the poet’s hometown area, Huntington, Long Island, and will be at Brattleboro, Vermont in October. His Whitman will tantalize and reveal much. 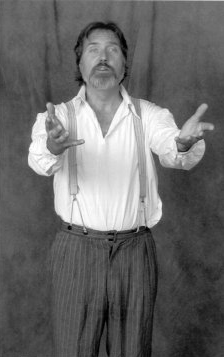